Quickly Figure Out if Your Lease Deal is Good

When comparing lease deals, here's a simple way to determine if it's a good deal or not.

What you need to do is figure out your "real" monthly payment per $10,000 worth of vehicle.

This formula DOES NOT INCLUDE taxes, and other fees like registration and doc fees, because each state has different rates and I want to make sure everyone can use this same formula no matter where you live.

This formula also assumes a 36 month lease with 12K miles/year for mainstream cars, and 10K miles per year for luxury vehicles.

By doing this, you can compare any two lease deals no matter what car you're looking at or how much price difference there is.

The formula is actually very simple, but can confuse a lot of people:

Let's take a look at a real lease deal from Hyundai for the 2017 Sonata. I took this from the manufacturer's web site, and highlighted the important parts needed to calculate whether this is a good lease deal or not. 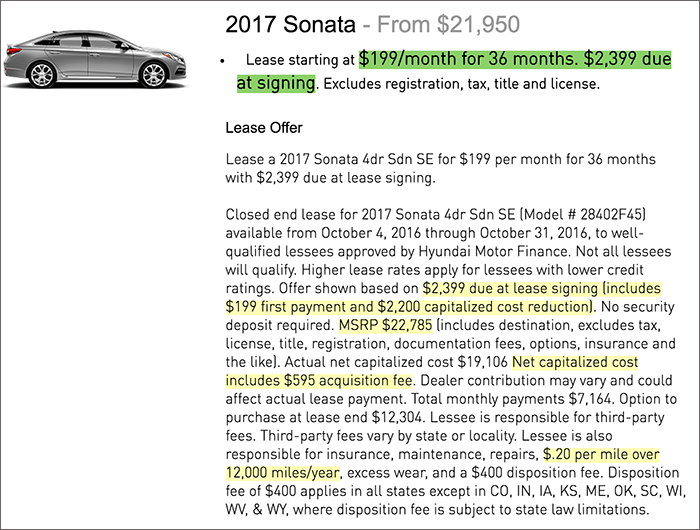 1. Figure out the "Real" Monthly Payment

2. Figure out the Monthly Cost Per $10K Worth of Vehicle

The very best lease deals I've seen hover around the $100 per $10k mark. These don't come around too often, but you will find deals in the $110 to $125 range pretty regularly.

What About Leases with More or Less Annual Mileage?

Here's a handy table showing the cutoff points for a good deal on both Mainstream and Luxury vehicles.

This is a quick and easy way to see if your lease is a good deal or not. As long as it falls below $125 per $10k worth of car, you're looking at a pretty decent lease deal.

The good news is that you can usually beat most advertised Lease Deals when you start shopping around. For the example I used on the 2017 Hyundai Sonata, you may be able to get that deal down to the 110 range simply by shopping around (the advertised lease rates assume a minimal discount from the dealer, but a lot of dealers will go way below this, you just need to shop around, I recommend you get quotes from TrueCar and Edmunds to quickly see some good deals.

I get a lot of people asking me to review their lease deal or check to make sure they're getting the formula right. Unfortunately, I'm finding I don't have the time to answer each one, so I created this simple calculator. Just enter the MSRP, monthly payment, down payment (if any), and acquisition fee to come up with the lease score. Make sure taxes and other dealer fees such as doc fee, registration, etc ARE NOT INCLUDED!


My Recommendation for Car Shoppers

TrueCar No-Haggle, CarsDirect, and NADAGuides are the quickest way to see the lowest car prices in your area. These sites show you no-haggle prices from dealers closest to you - and the deals are usually really good. This should be the first step you take when negotiating your car price. Follow this up with my checklist to make sure you squeeze out every last bit of savings.
- Gregg Fidan
Signup for The Weekly Newsletter

Got a Question About This Article?