The Most Dependable Used Cars Ranked by J.D. Power

Each year, J.D. Power releases their Vehicle Dependability Study which ranks used vehicles by the number of problems experienced in the last 12 months.

The Vehicle Dependability Study focuses on cars that are 3 years old, so this year's study is for the 2008 model year.

The reason these rankings are so important is because dependability has a big affect on resale values. Cars that are ranked well tend to hold their value better because of higher demand for dependable used cars.

This year's study named Lincoln and Lexus as the most dependable brands, with 101 problems per 100 vehicles for Lincoln, followed by Lexus with a score of 109.

It's the first time Lincoln has been named the most dependable brand in the history of the study.

Jaguar also suprised everybody by finishing #3, with 112 problems per 100 vehicles.

The study also ranks individual models in each category, and Toyota's seven individual segment victories gave them more individual victories than any other brand.

Here is how each brand ranked this year: 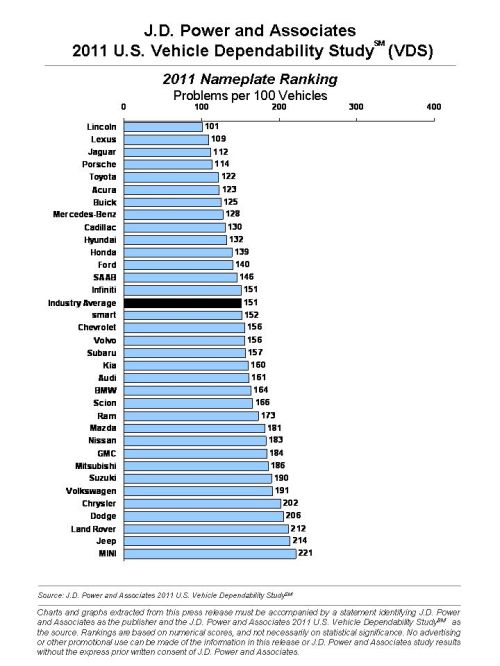 My Recommendation for Car Shoppers

TrueCar No-Haggle, CarsDirect, and Ryde Shopper are the quickest way to see the lowest car prices in your area. These sites show you no-haggle prices from dealers closest to you - and the deals are usually really good. This should be the first step you take when negotiating your car price. Follow this up with my checklist to make sure you squeeze out every last bit of savings.
- Gregg Fidan
Signup for The Weekly Newsletter

I welcome your car buying questions. Email Me and I'll be glad to answer them!