Those of you looking for huge discounts on new cars need to pay attention to hidden dealer rebates.

These are cash-back rebates given to dealers (not consumers) by the manufacturer in order to help sell slow-moving models.

These hidden rebates are generally kept secret - as the name implies, but that doesn't stop certain dealers from leaking the information.

Consumers aren't supposed to know about these since it leads to lower transaction prices. 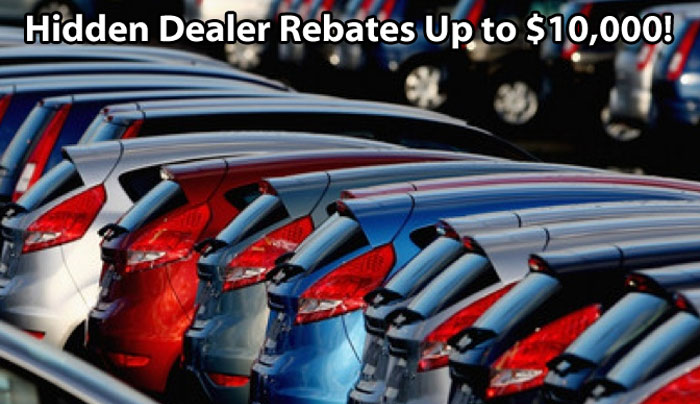 Dealers can use these hidden cash-back incentives any way they see fit - but usually, they will pass the rebate on to the consumer.

Keep in mind these rebates are mostly on leftover models or ones that are less-popular. The largest ones are actually on leftover 2010 models!

Many car shoppers aren't interested in these vehicles, but if YOU are, then you're in luck because you should be able to negotiate a killer deal.

Use our Car Negotiating Method to squeeze the most savings out of any deal.

My Recommendation for Car Shoppers

TrueCar No-Haggle, CarsDirect, and NADAGuides are the quickest way to see the lowest car prices in your area. These sites show you no-haggle prices from dealers closest to you - and the deals are usually really good. This should be the first step you take when negotiating your car price. Follow this up with my checklist to make sure you squeeze out every last bit of savings.
- Gregg Fidan
Signup for The Weekly Newsletter

I welcome your car buying questions. Email Me and I'll be glad to answer them!